If on January 25, 2016, you happened to be in the vicinity of the small Russian city Kovrov in the Vladimir region, you would not only have been extremely cold in the mid -20 ⁰C, but would have witnessed a low flying hot air balloon.

Displaying a bright white, red, and blue checkered design and the B&NBANK logo, the balloon moved slowly eastward, with a small flame from a burner shining as a beacon in the still and cold morning air. If you were to trudge the snowy fields in the direction of the flying vessel, you would have run into a group of people dressed in multiple layers of winter clothing that were driving Toyota Hilux pickup trucks. They would explain to you that the balloon above was being piloted by two Russians, Fedor Konyukhov and Ivan Menyaylo who are trying to set a new world record for time aloft in an AX-9 hot air balloon. The previous record of 29 hours 14 minutes was set by an American William Bussey on January 25, 1993. After 30 hours of flying the B&NBANK balloon the two Russians were still in the air determined to last as long as possible.  While the freezing air temperature proved to be one of the most trying aspects of this endeavor, it would provide the ideal conditions for the longest duration flight.

If you decided to accept an invitation and stay with the support group for two more hours, you would learn a few interesting facts about this flight and what went into its preparation. By the time the balloon landed after being in the air for a total of 32 hours and 12 minutes, you’d have a good idea of what had motivated Fedor Konyukhov and Ivan Menyaylo to undertake such a flight and why it had to be done during one of the coldest months of the year.

It all began in the fall of 2014, when Fedor Konyukhov was taking a piloting course in order to obtain the required number of flying hours for a hot air balloon pilot’s license. The training hours that turned into weeks and months, and a successful passing of the license exam, were a part of the bigger plan, which Fedor Konyukhov has been working on for the last two decades.  He plans to become the first Russian to fly solo around the world on a MORTON Rozière balloon, manufactured by Cameron Balloons in UK. Fedor’s flying instructor was Ivan Menyaylo, a Russian representative of Cameron Balloons and the director of Aerowaltz company specializing in renting and providing private tours on hot air balloons. As they were practicing the art of flying an AX- 9 balloon, Fedor and Ivan decided to work together towards improving on one of the standing records for an AX-9 hot air balloon. The record they set their sights on was the longest time aloft set by Russian Vladimir Gladkov, who in 2013 kept his balloon in the air for 17 hours and 49 minutes.

In March of 2015 Fedor and Ivan were ready to take on the Russian standing record and successfully lasted in the air for 19 hours and 10 minutes. Their balloon and equipment were supplied by the Russian company RUSBAL. The successful flight encouraged the pilots to aim at setting a new world record for the longest time aloft.

Based on their experience in 2015 when they were in the air for more than 19 hours both day and night, the pilots decided to implement a few adjustments that would help them last longer during the new world record attempt. For example, this year the gondola basket weighed about 40 kg, two times lighter than the one in 2015. The craft was equipped with 50 light tanks of propane gas that were made in Hungary and assembled by RUSBAL.

The pilots were ready for take-off since December 1, 2015. However, the weather was not cooperating, kept pouring rain, and wet snow all month long. Not only was the start keep postponed, but even the training flights had to be cut short. The weather prognosis showed that during January 24 – 25 there would be a window of opportunity to attempt the record flight. The air temperature was in the mid -20 ⁰C, dropping to -32 ⁰C at night.  There was a light breeze and full moon under a clear sky. The location for the start was determined in advance. One of the airstrips of Sonino airfield, in Tula region (120 km south of Moscow), had to be maintained and cleared of snow throughout the week preceding the start date.

The pilot’s winter clothing was supplied by Red Fox (St Petersburg). The whole body suit reminded Fedor of his ascents of Mt. Everest.  During the flight even with the best gear the pilots still struggled to stay warm. A pilot doesn’t get to move around much and generate body heat. To keep the weight of the basket as light as possible, even the food and thermoses with hot drinks had to be kept to a bare minimum.

The 50 jettison tanks of propane gas circled the gondola at the beginning of the flight. It was estimated that this amount of fuel should last long enough to set the record time.  An empty tank weighing 13 kg would have to be dropped off right away.  Given the trajectory of the flight, sometimes the dropped tanks would land in the middle of pristine fields covered with snow or on remote roads that haven’t been plowed for weeks.  The support team needed not only good snow boots but more importantly a reliable vehicle that could drive in snow and ice; night and day to follow the balloon and retrieve the empty tanks. A Toyota Hilux pickup truck was the ideal vehicle to tackle the unpredictable and severe conditions.

Lenovo ThinkPad tablets were used as communication devices for the pilots and the support team on land. Despite the freezing air temperature, the equipment worked beautifully.

The burners supplied by RUSBAL worked the entire 32 hours without any signs of slowing down.  During the first 30-40 minutes of the flight the burner temperature was 155 ⁰C, than 3 hours later the temperate was fixed at 120 ⁰C to provide a steady and strong flame.

Communication with the Air Traffic Control services was the sole responsibility of the support team on land. Based on lessons learned during the 2015 flight, the pilots knew the importance of good communication with air traffic control. This year, the team had a designated person in Moscow office, who was in charge of contacting the local authorities. The pilots were able to focus on navigating the balloon, changing and releasing empty fuel tanks, removing ice from equipment, and conserving their energy to stay warm.

Condensation of warm air inside the envelope allowed water to accumulate and run down the fabric only to freeze rapidly at the base of the envelope. Some of the condensation runoff would escape and continue to drip onto the equipment in the gondola threatening to cover everything with a thin layer of ice. Both pilots had to work hard to prevent the icing inside of the gondola, and especially the fuel tanks. This challenge has to be addressed before the pilots’ next flight in freezing temperatures.

This 32 hour record flight was not only a chance to set a world record but a great experiment that will be invaluable in preparations for the pilots’ next ambitious goal – flying from the North Pole to mainland (landing in either Russia, Canada, the USA, Norway or Greenland). The new balloon will have an envelope of 10,000 cubic meters the largest yet to be made in Russia. The team plans to take off from the Barneo polar station in April of this year. The North Pole flight will be another huge step forward in perfecting piloting skills and selecting equipment and supplies for Konyukhov’s first attempt to fly solo around the world in June 2016.

Fedor Konyukhov reflecting on the 32 hour flight: “Prior to the start Ivan and I had a couple of goals that we were hoping to achieve. First and foremost, we wanted to beat our own record of 19 hours. This was by far the most important goal. The balloon was extremely heavy and the amount of fuel we needed was very large. The next goal was to last 24 hours if we manage to surpass our 19 hour mark. When the sunrise greeted us after long hours of freezing darkness, we knew that the long standing record of 29 hours set by William Bussey in 1993 was within our reach. We pressed on. The fact that we lasted through the most difficult part of the flight – the night – gave us a huge boost of confidence. Before too long we were in the air for 30 hours, and the additional two hours were rather enjoyable. In the end, we had reached 32 hours and 12 minutes. This record attempt belongs not only to us but to our support team; without their dedication this achievement wouldn’t be possible.”

Ivan Menyaylo was very encouraged by the amount of interest and support this flight has generated: “In life, any record and achievement is based on human ability and determination. It also depends on technical capabilities of the equipment. The end result is not only a successful record attempt, but a new horizon for future achievements.  This new record is not for us to keep. We hope that it will promote the sport of aviation, air ballooning, and in general, a healthy and adventurous lifestyle in Russia. It was incredible to watch so many people taking a huge interest in our flight. Thousands of people were watching us thanks to the live coverage by the mass media. We received hundreds of text messages with warm wishes from our countrymen and people from other countries.  Our hope is that as we continue our balloon flying adventures many young people will show interest in this sport and will pursue education in aviation.”

This record attempt is subject to FAI approval and ratification. Application was submitted to FAI and can be tracked here. 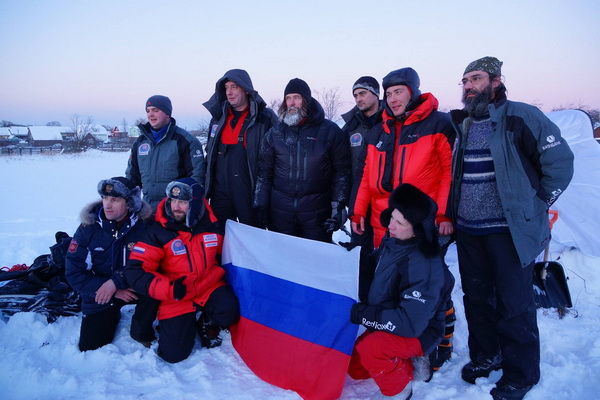 Proud Sponsor and Partners of the AX-9 B&NBANK flights:

B&NBANK – main sponsor of the project