The Round the world flight is complete and Fedor is back safely to Northam, Western Australia. All equipment is now at the same hangar! It was an incredible event for all those involved directly and indirectly. 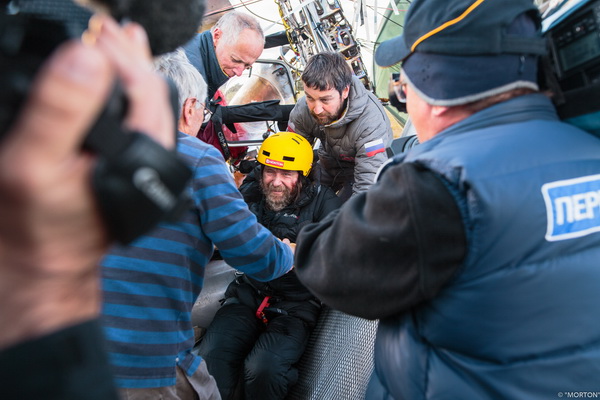 The third achievement, which will not be entered in the FAI book of records, but is of great importance: Fedor Konyukhov is the first person ever to succeed in flying a balloon around the world on his first attempt.

Fedor is the first person ever to fly a balloon around the world and fly back over the same airfield he launched from.   This is probably the most extraordinary achievement of the flight and is unlikely ever to be completed again.

Fedor dedicated the flight to Steve Fossett as he was a pioneer in this field.

Of course a flight like this requires the involvement of many others to succeed.  Thank you to:

The main sponsor of the flight – a group of companies MORTON that believed in the project, in the team and in the pilot.  It took Fedor Konyukhov 10 years to obtain financing for the project.  Only meeting with the president of GC Morton – Alexander Ruchyev – gave the necessary impetus to the project.  Round the World flight of the Morton balloon was financed by private companies, with GC Morton assuming the main financial burden.

“Morton” group of companies is a leading Russian developer, which in 2016 will celebrate 22 years of successful operations.  The company specializes in the construction of large-scale housing estates in Moscow and in the Moscow Region.  At the beginning of 2016 the total current portfolio of GC “Morton” projects exceeded 8.3 million square meters of housing, and the total number of objects has reached 42.  Company details: http://www.morton.ru/kompaniya/

“Open Sea” Foundation for cultural and educational programs and its president, Mikhail Simonyan for the financial support of the project.

Cameron Balloons, manufactured the balloon in Bristol England. Overall the balloon is incredibly tough, the gondola well laid out and comfortable and the burner system reliable and powerful enough. Fedor is very complimentary about the system and it got him around the world through some very severe weather! Alan Noble provided advance project management and Don Cameron was the launch master on the 12th of July. Best specialist – Dave Boxall, Pete Johnson, Andy Skirrow, Chris Lachenicht, Simon Whatley and Adrian Keeley travelled to Australia to assemble and launch the balloon from Northam.

Australian Project Manager obtained the approvals for the flight and organised the Australian logistics.  During the flight he was the balloon specialist in Flight Control and assisted Oscar Konyukhov in decisions and flight planning. John’s experience was very important for our team as together with Dick Smith he flew across Australia from west to east on a Roziere balloon.

A long-time friend and sponsor of Fedor, introduced him to Cameron Balloons in 2014, organised the essential landing retrieve helicopter from Bonnie Rock and provided non-stop enthusiasm. Dick Smith was Fedor’s sponsor for Round the world nonstop sailing voyage in 1990-91. Fedor sailed from Sydney and returned back to Sydney after 222 days at sea.

Seamless supply of helium, ethane, propane and liquid oxygen with Doug Maclaughlan and Erol Arican on site for the tank filling and balloon inflation.

Gren Putland organised local logistics and the many volunteers needed for the launch.

Claude Meunier provided the hanger to prepare the equipment and pack up afterwards.

Anton Parfenov and Jacob Orlov for their tremendous support and 24-hour duties in the Flight Control Center in Northam during the flight.

Andrei Abrosimov and Galina Abrosimova for helping to organize the work of our team in Australia and for attracting volunteers from among our compatriots.

Alexei Vikulov, a translator and tour guide for professional services in translating instructions for operating the balloon’s fuel system and for press releases translations, as well as for work with friends and sponsors who have come to Australia to support Fedor prior to take off.

The Shire and residents of Northam provided enormous local support including use of the Airport.

Airservices Australia and the air traffic controllers were so flexible as the balloon transited controlled airspace.

Sponsors of the project:

Breitling – the official timekeeper of the project

Lenovo – the official IT partner

Iridium Russia – for the provision of satellite communications

Forward – for outfitting the team and the pilot

All supporters and followers who sent positive vibes and thoughts to Fedor. Thank you very much. We did it together!